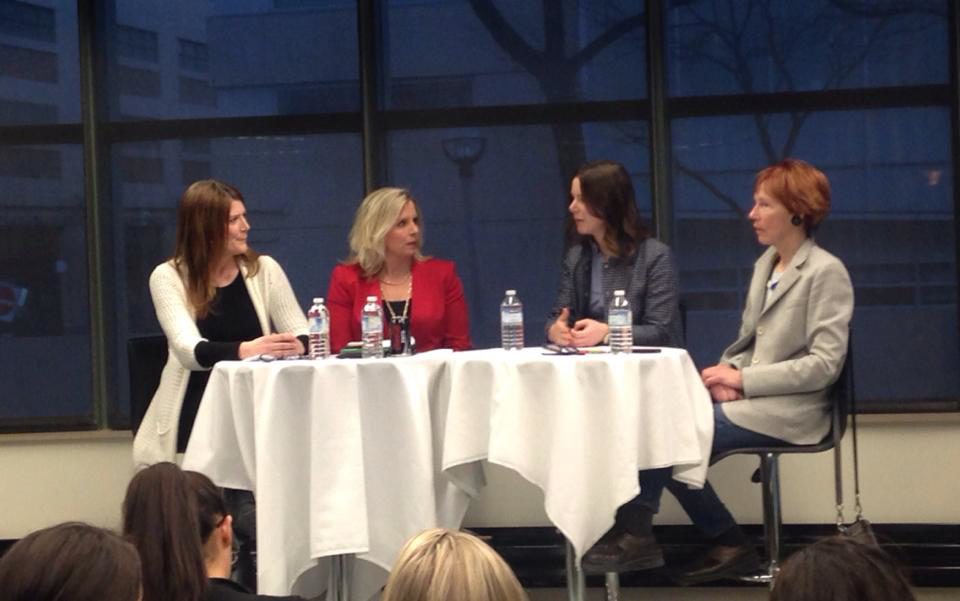 The increasing emphasis on female reporters’ looks amounts to “the Kardashian-ization of sports media,” a former Ottawa Sun sports editor charged during a recent panel that examined women in sports reporting.

Jane O’Hara was joined by Sheri Forde of TSN and Megan Robinson from SportNet’s Fan 590 on the March 24 panel, called “From the Starting Blocks to the Finish Line: How Women in Canadian Sports Media Have Run Their Race.”

The three journalists and moderator Norma Wick, a professor at the Ontario College of Sports Media, swapped locker room “war stories” that got plenty of laughs from the audience.

While the ongoing challenges of the business were discussed, all three panelists observed that women in sports media are an extremely positive force because they tell more human stories, as opposed to just focusing on the “who-won-the-game” narrative.

“Men tend to treat it a bit [like a competition] where they’re all talking about what they know about some guy’s stats,” Wick said. “Women are more interested in the how’s and the why’s and what makes people tick. “

Much of the discussion, however, was devoted to how the industry has changed over the years – and not always for the better.

“Back in the day it was never about you, it was about the story,” Wick said. “Now it’s now about the personality, getting the Twitter followers and getting all the attention.”

The rise of social media has also made female sports reporters the subject of harsh criticism online. Forde said she is the target of vicious comments about her weight and looks. Robinson said she uses Twitter for work because it’s part of her job description but that the constant criticism is difficult to stomach.

“Creating a separation with social media is the only thing that keeps me sane because it’s so awful and negative and people are really nasty,” she said, noting that she has felt the “Kardashian-ization” effect first hand.

“I’ve been told to lose weight and to change my hair before.”

Wick said that when she first started working as a sports reporter she wore a business-like suit. Over time, however, younger reporters have been dressing more provocatively.

Forde, for her part, urged female journalists to “never underestimate the power of a pantsuit.”

The three panelists said that acting seriously and dressing the part helped avoid problems when reporting in the locker room, which used to be a no-go zone for female sports reporters. Robinson illustrated the extent to which things have changed when she recalled one occasion where she was catcalled in the locker room by a player and demanded the interview to be held outside because she felt uncomfortable. The owner of the team personally called her to apologize.

“As much as we’ve come so far, there are still days when I feel totally disrespected,” she added.

Despite joking about pantsuits, Forde admitted they don’t always work. A player in the locker room once yelled, “She’s just in here to see my ding-a-ling!” she told the crowd of about 40 people. “I was just doing my job. Like, I had a husband and a baby at this point.”

If you’re just “kind of” into sports, the three panelists made it plain sports reporting probably shouldn’t be your career of choice.

“Loving sports matters a lot, actually,” said O’Hara. “You really need to have some sort of compelling interest in it, to tell the stories of the players.”

Rachel Surman is a fourth-year student in Ryerson University’s School of Journalism.

My double life: Journalists who also write fiction and poetry

Under the Nazis’ Thumb: A lunch and learn